On Wednesday 3rd April, Y2 took part in an engaging and informative workshop delivered by PCSO Duggan. The workshop focused on the role of police officers and the emergency services in the community. The children learnt how to stay safe and make the right choices, particularly in relation to “stranger danger.”

On Monday 6 Edinburgh and on Wednesday 6 Cardiff and 6 Belfast visited the Imperial War Museum. Both trips were very enjoyable, and allowed children to observe lots of exciting artefacts linked to their history topic: 20th Century Conflict. Both school and museum staff were very impressed with the knowledge children demonstrated as well as their general behaviour.

We are very excited to be launching a weekly Stay and Play session for 0-3 year after the Easter holiday. Please look out for a special information sheet coming out soon which will include dates, times and what will be on offer! 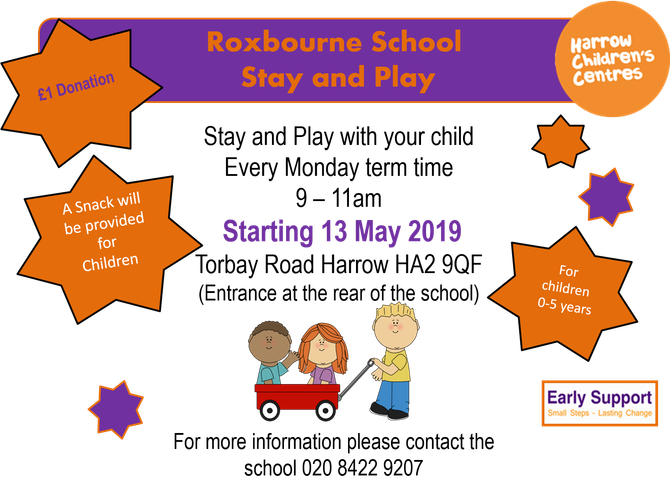 This was a memorable experience for all pupils! The workshop was informative, hands-on and engaging. The look of wonder and surprise on children’s faces was delightful, especially when they had the opportunity to observe a female mouse giving birth to 8 young ones, how incredible!

Y4 had a brilliant trip on Thursday 28th March to the British Museum. Y4 visited different galleries showing Britain before 1000 AD. In the Viking Gallery, pupils saw lots of different artefacts that they have learning about in class. Pupils had the opportunity to see weapons such as swords and spears that the Vikings used when they raided and invaded other countries. Children also saw artefacts that provided them with an insight into the Viking way of life, items included tools, jewellery and coins. A highlight of the visits was seeing a prow of a long ship and the detail involved in its design. It was a great day!

On Monday March 25th, the Roxbourne school football team attended the school football league finals at the Hive, the home ground of Barnet FC. Roxbourne played three games in their group, drawing two and losing one (0-0, 0-2, 1-1). Roxbourne were very unlucky not win their first game, and were doing well in their second game until a lack of focus gifted the opposition an easy goal. There was a great effort and team performance for our third game as Roxbourne fought back from going a goal down to equalise with a good finish from Husain. Unfortunately it wasn't enough to qualify as Roxbourne finished third in their group. Well done to those who participated.

Roxbourne Dance Club performed at the Harrow Dance Showcase at Hatch End High School. We really enjoyed watching the other Harrow schools rehearse for their performances and listening to the different styles of music. The girls performed the routine very well and had a great show presence. Their behaviour throughout the afternoon and evening was impeccable and they really portrayed Roxbourne in a positive light. Well done!

To mark Red Nose Day on Friday 15th March, we welcome children to attend school in non-uniform / red clothing and to make a minimum donation of £1. As part of this event, we will also be providing children with a themed lunch. This will entail:

Two of our pupils attended the guitar festival at Harrow Arts Centre. They spent the day rehearsing with pupils from other schools in the Borough and in the evening performed a concert to parents and other dignatries. Illyaan and Sharrven both said that this was a fantastic experience to play with other students and they both met and made new friends. Some of their favourite pieces were Peter Gunn Theme, Faded and Guantanamera. Well done to both for taking part and representing Roxbourne at this event.

Roxbourne competed in a Basketball competition at Pinner High School. This was a 3 a side event for year 6's with mixed boys and girls. Roxbourne played four games, winning two and losing two. Unfortunately Roxbourne narrowly missed out on a playoff place by one point, finishing 3rd in their group.

At Roxbourne we are introducing a new platform for Mathematics homework. Maths with Parents is an organisation that brings school learning to your home. Its aim is to bring you and your child together and enjoy mathematics, in line with what is being taught in class. Mr Mokaddem will be running workshops for the following year groups on the following dates. Child care will be provided. Come with your maths hats on as we’ll be signing up to the platform and playing some games!

On Thursday 7th March, the children and staff of Roxbourne celebrated World Book Day. Each class created a poetry anthology and presented them to the rest of the school at our World book day assembly. The children also created T-shirts to wear on the day and celebrate their writing. The books were then judged by an independent panel. On Friday 15th March we had an awards ceremony where winning classes were presented with their very own ‘Bookend’ award. We have also had the book fair running this week and we have been selling a variety of books to our students and parents! Overall this past fortnight has been a huge celebration of literature and a wonderful series of events of which the children and staff have thoroughly enjoyed.

On Wednesday, Year 6 took part in a TFL safety and citizen workshop. They received some important messages about personal safety, respect, responsibility and awareness both on and around public transport. The workshop covered the different forms of public transport, informing, challenging and reinforcing the children’s knowledge as they become increasingly independent.

Roxbourne have had a busy few weeks in terms of sporting competitions. On Tuesday 5th of March sixteen pupils from year 5 and year 6 were selected to compete in a Swimming Gala event at Harrow Leisure Centre. The events included individual and relay races, including swimming strokes such as breaststroke, backstroke and freestyle. Although Roxbourne finished with a rank of 16th overall, there were some outstanding performances.

On Tuesday, as part of our ‘Shang Dynasty’ topic, year 3 visited the British Museum. The children and adults thoroughly enjoyed the visit. The children were amazed to see the Shang artefacts in front of them! Thank you to everyone who supported our trip – it was very successful.

On Friday 1st March, Year 1 experienced a fabulous carnival celebration with Dance Days. They all dressed up with headdresses that they had made and masks from Dance Days. The children followed different dance moves and learnt a routine to Samba music, which they performed to the other class. During the session they had developed such confidence that they performed a solo free style dance to the rest of their class.

On Thursday 28th February, Year 6 took part in an engaging and informative workshop, delivered by two PCSOs. The workshop focused on, accountability, cyber Bullying, gangs and knife crime. The children took part in role play acting as a judge and jury, discussing real life cases – there was some harsh sentencing! Overall, the children learnt how to keep safe and make the right choice, particularly when they go to secondary school. Since the workshop the Y6 have been asked to write a letter to the police commissioner, Cressida Dick, about what they took away from the experience as they hope to extend this programme across London.

Year 1 had a visit this week from a local Police Officer who discussed how children can be safe and they discussed what to do if they were lost. The children were very interested and asked lots of well thought-out questions about what the police do and how we can be safe.

Y5 had a fantastic visit from the Learning Dome. We all climbed into the dome where we were given an interesting talk about our solar system and how the different days, months and years occur in relation to the sun and the moon. Our favourite part was when the lights went out and we were shown the different constellations of the stars. It looked like the sky was moving!

C Upcoming Events
School will be closed from Monday 23rd March to pupils except for those whose parents are key workers. Please contact the office if you have any questions.
Top
Cookie information
Cookie Notice